Donation is a voluntary and altruistic act, in which women between 18 and 35 donate her eggs selflessly in order to help other couples or other women with infertility problems.

It is a totally anonymous act, according to Spanish legislation, so donor and recipient will only know general data, such as the blood group, eye and hair colour, age…

Once the process is finished, the donor will be economically rewarded for the cost resulting from the treatment (the time spent, travel expenses, inconveniences, …).

The requirements to become a donor are:

What does the process consist of?

We start with an exhausted interview to collect personal and family information and to rule out any possible hereditary disease or other causes of exclusion from the donation program.

The medical team will study the questionnaire and, if everything is alright, will contact the candidate in order to perform relevant analysis and a gynaecological exploration.

Once all the studies have finished, the donor will be included in the donation programme, waiting for a patient needing eggs with the same physical characteristics.

The donation procedure consists in a hormone treatment which lasts about three weeks. During this period of time, periodic ultrasound controls are performed to observe the growth of follicles (fluid-filled cavities where there are the oocytes), until observing their optimal size, moment in which the extraction of the oocytes is performed by follicular puncture and vaginally in an operating room.

Extraction is performed under sedation and lasts no more than fifteen or thirty minutes. It is done using vaginal ultrasound with a needle draining the follicular liquid through aspiration. It is not a painful procedure for the donor thanks to sedation and does not require medical care, as it leaves no visible scars. It can only lead to a light bleeding within hours of the procedure and a pain like menstrual cramps. After the intervention, a recovery period is necessary (about 15-30 minutes).

Questions on the procedure

It is important to bear in mind that donating eggs does not mean exhausting the ovarian reserve. Women are born with an average of 2 million of oocytes and not all of them will be ovulated.

What happens with them?

In order to produce an oocyte, naturally and spontaneously each month or menstrual cycle, several dozens of them need to be recruited, but only one of them, the most suitable one, will reach the final stage of ovulation.

The oocytes which have started the cycle but don’t evolve are lost and removed by the body.

The hormone treatment the donor receives stimulates the growth of these oocytes which otherwise would not reach the final process of ovulation.
Therefore, in no case does egg donation involve either loss of fertility due to an excessive egg retrieval or early arrival of menopause.

How many times can I be a donor?

It depends on each particular case. However, even though the law does not specify a maximum of donations per donor, it does require not exceeding six live births per donor.

Can I take contraceptive?

There is no problem if donors have taken contraceptive, but after treatment begins, they have to stop taking them until the treatment is completed. 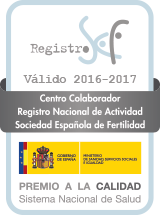